Jeremy was staring at the paperclip on his desk. Underwhelmed by the workload, he had done all of the paperwork he was tasked for the day and had nothing left to fill the last two hours of his shift. Normally, this would be the time where he would kill the time remaining on the Internet or reading a sci-fi novel, but the recently enacted company policy dictated no books during work hours, and the website blockers on each PC made each time killing site inaccessible. Instead, he sat staring at the paperclip. Lost in his own mind.

He was mentally checked out, but his subconscious mind studied each detail of the insignificant object. The way the light reflected off of the steel wire, the curvature of each bend, all soaked into his mind. He imagined the weight of it in his hand. In his minds eye, he felt as if he could feel the touch of it as if he were holding it. He thought about flicking it across the desk, when suddenly it shifted. The shift was so slight, that he barely registered the movement at all, but he was staring at it so intently that he knew he had seen it.

What just happened? He thought to himself. He was awakened from his trance-like state by a mix of surprise and confusion. Did I just move that with my mind? The thought of Telekinesis was always a little far-fetched to Jeremy, but he always fantasized about a world where powers like that could be real. Instead of continuing to question what had happened, he tried again.

Jeremy tried to force himself into that dream-like state that he was in previously, concentrating hard on the paperclip, but with his new focus, nothing was happening. After what seemed to be an hour, he had lost the intense focus he had been maintaining and started to stare in the same manner as when he had first seen the paperclip move. It was not a meaningful change, but it had came just the same. After another 10 or so minutes of his subconscious mind mapping out the various twists and turns of the paperclip, he imagined picking it up. As this happened, the paperclip raised about a centimeter off of the desk.

As soon as he noticed what had happened, the concentration was gone and the paperclip dropped.
I did it again! he thought.
Although it took him quite a bit of time to get it the second time, he felt reasonably sure that he had learned the trick of it. Jeremy took a deep breathe and let it out slowly. He set his mind at ease and forcibly went back into the mental trance. Feeling his mind dance with the euphoria of knowing that he had not been imagining it the first time, he fell back into the trance within minutes.

This time when he grasped the clip with his mind, he did not let his mind leave the trance. He lifted one end of the paperclip with his mind and forced it to stand on end. He imagined spinning it like a top on the desk, and as soon as the thought entered his mind, it danced. Twirling across the desk, rapidly spinning faster and faster, the paperclip began to blur. Jeremy almost jumped out of his chair out of pure joy, knowing he now had the powers of which he could only dream of obtaining.

One last test! he thought. Jeremy looked intently at the pen sitting next to his finished workload. As he studied it, he started to hear music. The music had a familiar sound to it, but he forced the sound out of his mind. He used his new-found skill and picked up the pen with the power of his mind. He started moving it towards one of the sticky notes across the desk. At this point the music penetrated his concentration and made him lose focus. He dropped the pen and tried once again to push the sounds out of his mind.

At this point, the music was getting louder and louder. It seemed to be coming from nowhere in particular, but it penetrated his every thought. He tried once more to push it away, but to no avail. He finally gave into the sounds, and at that moment, Jeremy woke up. 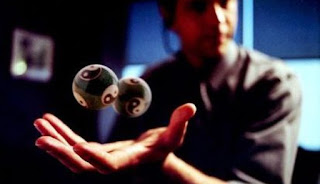 Posted by Disagreeable at 4:08 AM No comments: