I haven't mentioned it yet, but I am a HUGE Star Wars fan. So, today I was going through a Subreddit called r/ImaginaryJedi, and I found a gem that I'd like to talk about. Not before I share a picture of my favorite tattoo though:

This is how much I love Star Wars 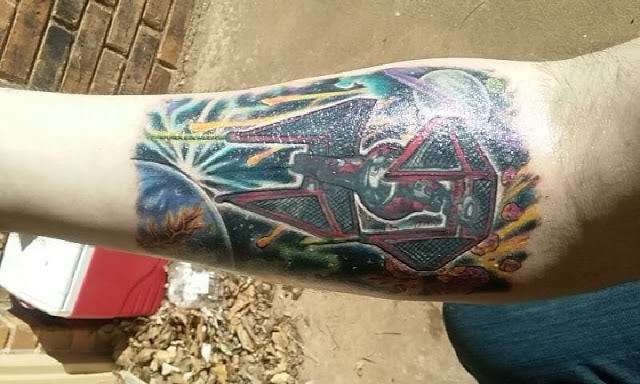 Anyway, back to what I found. I was searching Reddit for things to entertain me, and I found my next talking point. An artist who goes by Fan Zhang created a scene that struck me at first as completely absurd and not in the spirit of Star Wars, but the more I looked at it, the more I realized it could be possible in the Star Wars universe if they really wanted it.

The picture is this: 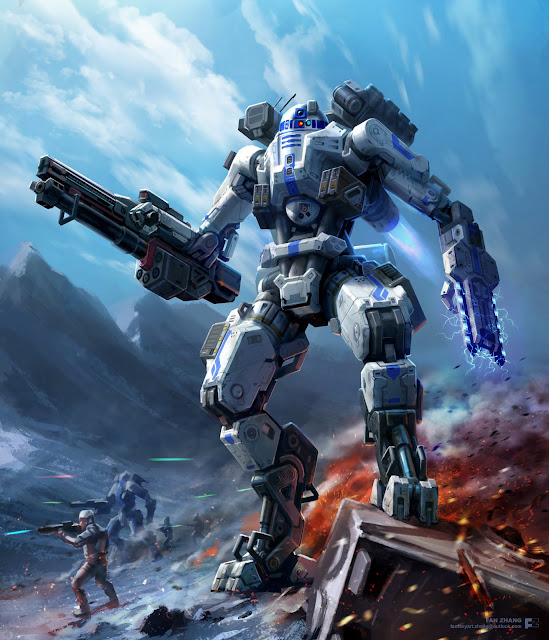 R2-D2 with a Titanfall style suit.
At first I thought it was ridiculous. What could R2-D2 really do with a Mech suit?
Then I started thinking about it. R2-D2 can plug into virtually anything in the Star Wars universe, and on top of that, we know that he loves battle. He shows it consistently throughout the movies and the TV series Clone Wars. He zaps enemies, he destroys battle droids using very clever tactics, and overall is able to think in a way that is more than just any old Astromech droid could.
(It's not lost on me how redundant Astromech in a Mech suit sounds)

On top of that, we see him loaded into ships in this exact way in the original trilogies; loaded with a crane/magnet/weird suction machine to the top of ships, and he is able to control them on his own when it's really needed a seen in the TV show. Who's to say, if this machine was created, that R2-D2 couldn't be given upgrades to his programming to include battle tactics and combat? We know from the series (Which is known as canon) that he has all of the republic battle tactics already in his memory banks, so all he would need is to integrate them into physical movements.

I scoured the internet for more pictures like this and came up with this by a modeler from Italy who goes by Lemcat who created this out of Gundam model pieces: 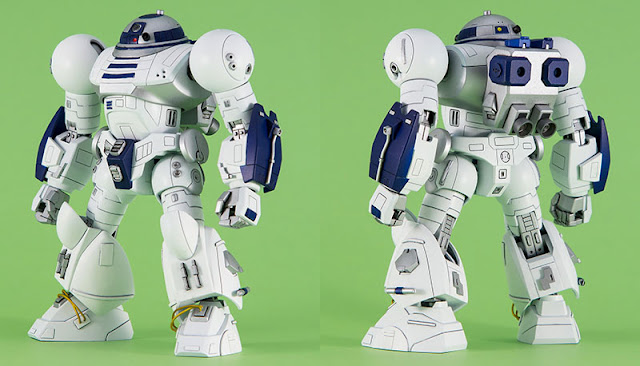 I'm not saying that this is what should happen in the Star Wars universe. In fact, at some points I felt like they tried to make him more powerful than he needed to be in Revenge of the Sith. What I am saying is that if they did add this, even if as just a DLC character in Star Wars Battlefront, I would be alright with it.

There are plenty of battle capable droids in the Star Wars universe, even not counting the droid army. HK-47 being on of my all-time favorites. They have bounty hunter droids, assassin droids, and droids like the hunter droids and the spider droids. In Star Wars, big droids are not unheard of, and they aren't used sparingly in the prequels either (Not that it makes it a good idea because the prequels got away with it).

Just imagine what C3PO would say about it?
It could be pure Gold if they used it in some big battle on a planet overrun by the First Order.
Now I know the whole story of Star Wars from now on is, as it should be, based largely around individual characters, and not by large army battles, so I don't need this to happen for me to enjoy Star Wars. Just throwing out ideas and seeing what others would think.

If you enjoyed this blog, please subscribe and share with your friends. Comment your thoughts on this, and give me ideas of what you would like to hear about in future blogs!
Posted by Disagreeable at 6:36 PM