In Star Wars: The Force Awakens, we are introduced into a new character named Finn. He started out as a Stormtrooper who was taken from his family as a child, too young to even remember his family. You may have seen the movie, but there is more to Finn than what is shown in the cinematic representation.

While in training, Finn (known by his fellow soldiers as "Eight-Seven") was the ideal cadet. He consistently made the top scores in training. He was trained in unison with other stormtroopers, three of which are of note: FN-2199 (Nines), FN-2000 (Zeroes), and FN-2003 (Slip). 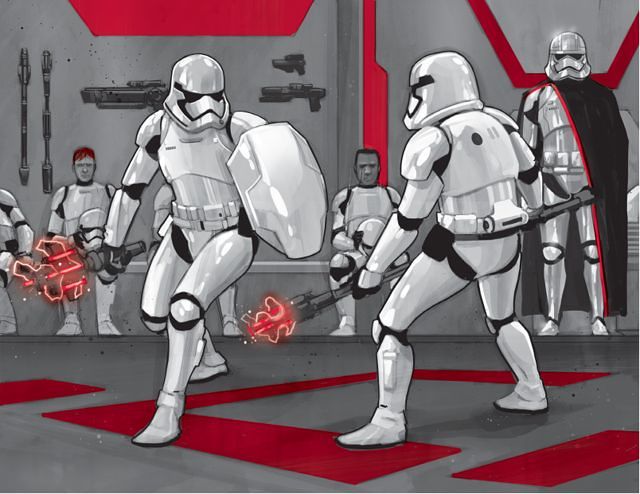 In training, Finn took charge and always had the highest kill count, but he also had to focus his efforts towards keeping their weak link Slip from falling in battle. In this, Finn was very good.
During their first mission in the outer rim territories, Finn was ordered to execute an Abednedo negotiator, which he did not have the will to do, already unsure about his ability to comply with the brutality of the First Order. Instead, Slip ended up attacking the negotiator, saving Finn from defying his orders.

During his training, Captain Phasma had this to say to Finn:
"You have great potential, 2187. You are officer corps material. Your duty is to the First Order above everything. Nothing else comes before that."

After being promoted out of training to a full fledged Stormtrooper, Finn's first real mission was a raid on Jakku. At the beginning of the raid, Finn's friend Slip was killed by a shot from Poe Dameron, and that was the first experience Finn had with loss. After the raid ended all of the stormtroopers were ordered to kill the remaining villagers, at which time Finn knew he could not continue fighting for the First Order.


Upon returning to the First Order ship the Finalizer, Finn was approached by Captain Phasma and was told to submit his blaster for inspection in order to make sure he had fired against the villagers.
Knowing he was in trouble, Finn, went against orders and decided to try to escape. He conspired with the captive Poe Dameron and escaped on a Special Forces Tie Fighter, killing many stormtroopers in the process. While flying, Poe refuses to call Finn by his code FN-2187, and gives him the name by which we all know him.


Fast forward through the events of the movie leading up to the raid on Maz's cantina, Finn is locked in battle once again, this time fighting against the stormtroopers he once called friends.
During the battle, Finn's previous friend Nines comes across him. Angered by the betrayal of Finn, Nines called out to him as "TRAITOR!" and took a fighting stance with the Z6 riot control baton that he wielded.
Finn, holding Luke's lightsaber, tried to hold off the attacks of Nines, but was quickly bested by his enraged old comrade. Before Nines could strike the killing blow, he was killed by a shot from Chewbacca's bowcaster, wielded by Han Solo.

After Rey is captured by Kylo Ren, Finn, Han Solo, and Chewbacca go on a rescue mission to Starkiller base. Finn, using his knowledge of the base against the First Order, captures Captain Phasma and uses her to take down the shield around the base. With great disdain for his old Captain, he and Han decided to dump her down the nearest garbage chute before continuing with the mission.

After finding Rey and setting charges around the Oscillator that they planned to use to stop the weapon on Starkiller base, Finn witnesses Han Solo being killed by his son, Kylo Ren. He and Rey escaped as Chewbacca detonated the charges that had been set. On their way back to the Millennium Falcon, Finn and Rey were confronted by Kylo Ren, who had been injured by a bowcaster shot the enraged Chewbacca shot before blowing the charges.

Faced up against another previous ally, Finn stops in his tracks and prepares to fight.
Kylo ignited his lightsaber and exclaimed at Finn, "TRAITOR!"
After disabling Rey with a force push, Finn is locked in a heated battle against the injured Kylo. Kylo Ren used his anger and pain to quickly injure Finn grievously.
Rey awakened and continued the fight against Kylo, subduing him and burning a scar into his face.
After a tear in the ground separated the two, Rey ran to search for Finn, who was in bad shape. Chewbacca returned with the Millennium Falcon, and together they took Finn back to their base to recover.

The last scene we see with Finn is him recovering in some sort of deep sleep before Rey leaves to find Luke.

Finn has been shown as a very compassionate character with a lot of heart. He does not wish to fight, but it is shown that if he has someone to protect, he will give everything he has to keep them safe.
Finn is one of my favorite characters that has been introduced into the Star Wars universe, and I cannot wait to see him continue to fight back against the First Order after his recovery.

Posted by Disagreeable at 1:27 AM