In this post I will be talking about one of many of the new theories surrounding the storyline and characters from Star Wars. Most of these theories are fan theories, though some are claimed to be leaks. I would not worry about spoilers while reading this due to all of these theories being created by fans, but if you don't want to take any chances, skip this post altogether.

Now that the warning is out of the way, I'm going to start out this with one of the theories I share with other Star Wars fans that sounds the most plausible.

Emperor Palpatine in the Rogue One movie:

Now, there is little denying that Emperor Palpatine is in this trailer, especially considering the ever-present black cloak he wears, the hunched over posture, and the real proof: his Royal guards standing at attention as he walks towards the pillar in the center of the room.

Wookieepedia, which I trust in almost all situations says this about the Canon version of the  Royal Guard:
"The Emperor's Royal Guard, known under the Republic as the Red Guard and under the Empire as the Imperial Royal Guard or Imperial Guard, were the personal bodyguards and assassins of Sheev Palpatine. Armed with force pikes and fully clad in their anonymous helmets and crimson robes, the Royal Guard were silent, imposing, and deadly. Those who proved themselves to be the most promising of the Imperial military were selected for duty as a Royal Guard and had to fulfill stringent requirements based on size, strength, intelligence, and loyalty to the Emperor."
So, we can only deduce from this image, taken straight from the Rogue One trailer, that Emperor Palpatine it the hooded figure.

The next thing I find very interesting is what he is walking towards.
Out of everything I have sen in the Star Wars universe, the only thing that the pillar directly in front of Palpatine resembles is a Bacta Tank. 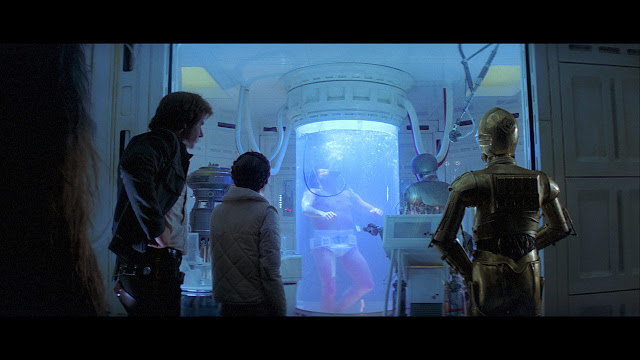 Bacta Tanks have been used very often within the Star Wars universe as basically a healing pod. If someone were to suffer a grievous wound that would otherwise kill them, spending a period of time in one of these healing pods would usually be enough to heal them completely.

You may ask, who would Emperor Palpatine visit in a Bacta Tank?
This is the million dollar question. Fans have run rampant after the trailer with wild theories about who might be floating in one of these tanks, healing from wounds inflicted from an unknown source.
One theory that rises above all else in my opinion is that the Bacta Tank holds none other than Supreme Leader Snoke himself. (I have more ideas of my own that I will share, but this is the focus for now)
The basis around this Theory is that at some point (possibly between episodes III and IV) Emperor Palpatine came across a powerful adversary. One who is as strong and cunning in the Force as any he had ever matched. After a relentless battle, Emperor Palpatine defeated the new enemy, ravaged his body with his signature Force Lightening, and overall scarred the enemy in a duel that anyone would love to see. In this theory, after destroying his enemy, Palpatine decided to keep him alive as a source of power, and possibly stealing bits of wisdom from him as he constructed his Empire.

This wouldn't be the first time that this has happened either. In the Revan book series (not Canon, but still possibly relevant considering the laws of the Force are still being upheld by Disney) a character (Not saying who for spoiler reasons) is captured in the same way and his power is continuously drained over his lifetime. It brings to life the possibility that Snoke is being exploited in the same way, and this would explain his appearance in The Force Awakens.

After Palpatine is defeated, the theory states that Snoke escaped his force prison, no longer controlled by Palpatine, and took over the responsibility of destroying the rebellion with his following of dark Jedi that he influences. That is pretty much where the theory ends, but I have more to add of my own. I don't expect to be right in my theories, but I like the ideas, and I believe many others may like them as well.

My theory on Supreme Leader Snoke:

We know from many facets of the Star Wars universe that cloning IS possible, and it is done widely from the books, movies, and video games. They even reference clones in The Force Awakens after Finn turns against the First Order. Another thing we know at least in the non-Canon universe is that force sensitive clones are possible. (See the Cuis clones). My theory is that Emperor Palpatine attempted to clone himself in the case that he should fall so that his legacy would live on. Only, the clone, overpowered by the amount of Force energy inside it, came out deformed and scarred. In the Star Wars universe, clones of Force users were called Aberrant Clones. According to the Wookieeepedia, often " clones were engineered and ultimately discarded due to their physical deformities and mental instability. "
What if this is what Snoke is? An Aberrant Clone that Palpatine decides to keep as a source of energy to fuel his own life and powers?

All of these ideas are just theories, but I like to think they could come out as the real story.
Thank you for reading! If you enjoyed these theories, Subscribe and share! I would appreciate it!
Posted by Disagreeable at 4:52 AM